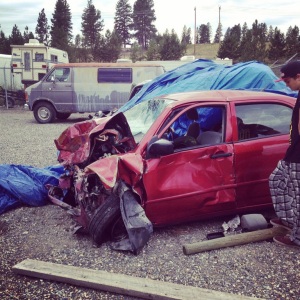 Today I deal with several different physical pains, including arthritic, muscular, and internal, as well as a new discomfort from a knee surgery I had last Tuesday. Each day I feel something new, and something old, and I always recognize where those pains originate from. After I finished my first year of my degrees at the University of Calgary, I returned to my home in Nelson, British Columbia, for the summer. After a month of enjoying the Kootenays, my mother and I ventured back to Calgary in June to visit family, and on June 9, 2013, we made our way back to Nelson. At the same time, a woman was drinking in a bar all day with her friends and decided to get into a vehicle and drive to her two year old son who needed to be picked up. However, she did not make it that far, and I am beyond grateful that her son was not in the vehicle. While driving around a corner in Skookumchuck, BC, her SUV crossed into our lane and hit our vehicle head on. That moment, and the hour that followed, is forever embedded in my mind, and is a memory I would like to share today so that others may feel comfortable opening up to me, their family, friends, MADD, or any other group/individual that is available and ready to listen. This post may seem darker than the ones I hope to write in the future, but it is an important part of my life that has brought me to where I am today, creating this blog.

I woke up in the vehicle minutes after the impact and saw smoke; however, my eyesight was so poor that I couldn’t quite understand what I was seeing. I describe it as though it were a movie, not real, until I began to smell the smoke and the burning from the chemicals in the air bag. And then, something so intense occurred that it brought me back to reality. I saw both of my hands up against the steering wheel, broken in half. I tried to move them, but they flopped about. I felt nothing other than pure shock. To my right side I heard my mom speaking in between gasps of air. If I wasn’t fully aware that what was happening was real yet, I did now. My mom told me at that moment that she was going to die. It was ,and still is to this date, the hardest thing I’ve ever had to hear. The man who called the ambulance was standing near us, telling us to wait, that help is on the way. His wife was with the woman who hit us, telling her to stay in her vehicle. I could see her, I could hear her. She was attempting to get out of her vehicle and yelling “They can’t find me!”, I later discovered she meant that the police couldn’t find her because she already had multiple impaired driving offences, as well as no license. When the ambulance came, I was informed they were going to take me out first due to the severity of my injuries, and yet my mom was still gasping for air. Since I was able to speak, I told them (slightly aggressively) to take my mom first. A few minutes after she was put on the stretcher she went into cardiac arrest, and in Cranbrook Hospital they declared her dead when seeing how severe her internal injuries were. It is difficult to express how overwhelming ecstatic I am that she is still with us today, on this planet, enjoying her new life. She is truly a miracle.

I waited close to 45 minutes for the jaws of life to tear my side of the vehicle open. My mother was gone, I had no idea how she was, and the woman who hit us was still in front of me. The man who I previously spoke of that was first at the scene was my guardian angel, he sat in the seat my mom was just in and kept me conscious. He asked about my life, my family, friends, and hobbies. He calmed me down when I felt my lungs collapsing, and he even laughed when I yelled at him to shut up. I was beginning to feel my pain, and when I was finally pulled out of the vehicle I blacked out several times. That drive from the crash sight to the hospital was the longest in my life. I felt everything now, and the paramedics were not allowed to supply me with pain medications. When arriving at the Cranbrook Hospital, I was brought into a room, was surrounded by doctors, and saw a mask go on my face before being put in an induced coma for two weeks.

In my future posts, I hope to discuss recovery, living with injuries, PTSD, anxiety, insomnia, surgeries, extreme life changes, Mothers Against Drunk Driving, family and friends, how I find joy in life and appreciate all aspects of this world, hope, as well as acceptance. The positive in my life outweighs the negative today; however, it was not always like this. For many who are experiencing any form of trauma, old or new, mental or physical, the negative may seem to take over most days. Today, there is sunshine. Today, you are alive. Today, you have people that love you. Today, remember the past, but stay in the present.

9 thoughts on “Today, While Recognizing The Past”

Providing the blunt and honest truth of life after impact. Exploring living with injuries, surgery and recovery, medications, PTSD and anxiety, chronic pain, mental health and travel, while providing awareness and support.

Uncover the booty and the rolls bb girl
Exactly what I needed. 💖
Some much needed Arthur spam cuz this little boy is sprouting like a god damn weed each week 🐶💖
This scar is me, it had been since the moment it was scarred onto my body. This scar has been me since an impaired driver hit my car and the air bag exploded onto my lap. Today I am proud of myself for acknowledging this part of my body, and embracing it. Arthur is clearly embracing it too.
Did you notice additional pelvic pain when you were sick with Covid? Have you noticed pain in the past when you were dealing with an illness, or when a chronic condition flares up, or even when you’re just feeling under the weather?
Loading Comments...
%d bloggers like this: